The Trans-Saharan Gas Pipeline (TSGP), as the trilateral project with a decades-long history is officially called, recently saw another attempt at revival when representatives from Algeria, Niger and Nigeria met in Niamey, Niger , in June. In July, the energy ministers of the three countries signed a memorandum of understanding (MoU) and agreed to set up a working group for the project with the aim of updating an existing feasibility study.

The idea of ​​transporting gas through the Sahara to Europe was first mooted more than 40 years ago. In 2009, an agreement was signed by the three gas-rich countries, but progress has stalled since then.

The TSGP, also known as the NIGAL pipeline, could now be closer to reality as Europe tries to reduce its heavy dependence on Russian gas following economic sanctions against Moscow over the war in Ukraine.

“This [the pipeline] should allow Europe to diversify its sources of natural gas supply, but also allow several African states to access this high value-added energy source,” said a joint press release published in June.

Now that energy ministers have signed a memorandum of understanding, their words must be followed by deeds

Once the 13 billion dollar (12.8 billion euro) pipeline is completed, it could transport up to 30 billion cubic meters (1,000 billion cubic feet) of gas per year from Nigeria, in West Africa. west, north across Niger and into Algeria. From there, the TSGP gas is expected to be pumped via the undersea Trans-Mediterranean Gas Pipeline to Europe or loaded onto liquefied natural gas (LNG) LNG carriers for export.

Energy experts, however, doubt African gas will enter Europe anytime soon, with some saying the pipeline will not be built within the next 10 years. Isaac Botti, a Nigerian public finance specialist from Abuja, believes a lack of political will could be the project’s biggest challenge.

“I think this is just a commitment on paper. Every real commitment must be backed by actions. So far, we are not seeing commensurate efforts from the Nigerian government,” he said. he told DW. Botti also noted that while Nigeria and Algeria would be the main gas suppliers, it would all “come down to the political will of the Nigerian government to make sure the project gets going.”

Nigeria — Wealth for the Few

Most of the 30 billion cubic meters of gas will come from the Niger Delta, a coastal region of the Atlantic Ocean belonging to Nigeria and endowed with the largest oil reserves in Africa. In addition to its raw wealth, the delta is rich in natural gas deposits which have already made Nigeria the second largest gas exporter on the continent after Algeria.

“Nigeria has one of the largest gas fields in the world…about 200 trillion cubic feet, with a production capacity of 3 trillion cubic feet per year. Looking at the monetary value of this field, we are talking of about $800 billion that could be earned from this project,” Botti said.

Despite Nigeria’s enormous resource wealth, its people suffer from poverty and political instability. In the Muslim-dominated north of the country, Islamic fundamentalists from the terrorist group Boko Haram are waging a civil war against central government authorities. Experts are already saying that the deteriorating security situation in Nigeria could ensure that the pipeline remains a pipe dream.

Another uncertainty that could thwart international funding for the project is climate change and the plans of wealthy Western economies to reduce their consumption of fossil fuels. The EU, for example, plans to reduce its carbon footprint by at least 55% by 2030, starting with phasing out coal and oil, but also reducing the use of natural gas. Fossil fuels must be replaced by green hydrogen produced from renewable forms of energy. 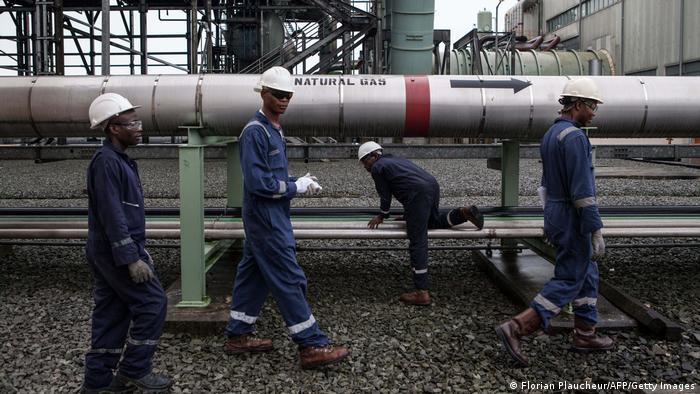 Benefits of gas for development

Under a revised budget plan for 2022, the Nigerian government plans to spend a total of 17.32 trillion naira (40 billion euros, $41 billion), about 18% more than the year former. The budget deficit is expected to increase to 7.35 trillion naira, or 3.99% of the country’s gross domestic product (GDP).

Despite rising oil prices, Nigeria’s oil sector underperformed in the first quarter due to “significant production shortfalls”, and the government said it needed to borrow from capital markets to meet funding targets , especially in infrastructure development. The quarter also saw Nigeria’s public debt rise from N39.56 trillion at the end of December 2021 to N41.6 trillion, putting enormous pressure on debt servicing.

Botti said Nigeria’s budget deficit is “serious”, and he criticized that capital spending was still “focused on the oil sector rather than the gas sector”.

Additionally, political differences continue to hamper the pipeline project and prevent Nigeria from benefiting from the global transition to renewable energy, he said. A new government after the next presidential election in 2023 would hopefully improve the situation, he added.

The growing importance of Algeria

“It’s stronger than in the early 2000s because the geopolitical gas crisis is much more acute and will last longer,” he told DW.

Algeria, in particular, now has the technical and financial capacity to build the pipeline, as rising oil and gas prices have given the country “enormous leverage”, Kas said.

He cited the TransMed pipeline between Algeria, Tunisia and Italy as an example of the growing energy importance of this North African country. “Italy and Algeria have just signed an agreement to increase gas supply this year and next year. This should bring the TransMed closer to its maximum capacity,” he said.

According to him, the new capacity constraints in North Africa could even bring the abandoned GALSI gas pipeline back into service. Also known as the Gasdotto Algeria-Sardegna Italia (GALSI), the pipeline would link Algeria to Italy via Sardinia and is presumed canceled as construction has stalled.

Kas said Algeria would be able to complete the pipeline on its own if it got assurances from European countries for long-term contracts. Without it, Algeria would not build GALSI, he said, because the Europeans might one day say “we don’t need gas from Africa anymore”.

This article was originally written in German.

Armenians have sought their fortunes and found refuge in Arab countries for centuries LONDON: When Armen Sarkissian, the President of Armenia, got off his plane in Riyadh in October this year, he became the first president of the small former Soviet republic to visit Saudi Arabia. For almost 30 years since Armenia declared independence from […]

Goge Africa, a tourism and cultural media brand, claims to explore African countries with the aim of offering solutions to travel, trade and investment issues in Africa. Its chief executive, Nneka Isaac-Moses, in a statement released Friday in Lagos, said the organization’s leadership team had recently visited Tanzania and Burundi in East Africa. She said […]