Small glass and brass beads, dyed porcupine quills, cotton and polyester fabric and sinew embellished this circa 1900 Sioux skin cape, made by Julia Jordan, Oglala, for her daughter , MaryJulia. It fetched $37,500 from an American museum and was the highest price at the sale.

DALLAS – Heritage Auctions’ Ethnographic Art, American Indian, Pre-Columbian and Tribal Art Signature® Auction on December 2 presented artifacts from the Americas and Africa to a global audience, with a cumulative total of $1,051,585 realized.

“I thought the auction went very well. At the sale, we only got two of the Native American lots,” said Delia Sullivan, Heritage Auctions senior specialist for Native American, Tribal and Ethnographic Art.

One of the highlights of the sale was three Sioux beaded leather garments – a cape, a pair of gauntlets and a waistcoat – and a beaded red woolen tablecloth, all of which belonged to the family of Pureblood member Julia Jordan Chief Red Cloud’s Oglala. band (1857-1913), who made them for his daughter, Mary Julia. Jordan was the wife of Charles P. Jordan, an Indian agent and co-owner with JA Anderson of the Jordan Mercantile Company on the Rosebud reservation.

Jordan’s beads have been worn in Indian shows and exhibited at exhibitions in Chicago, Atlanta, San Francisco and Cincinnati. The beaded skin cape, made circa 1900, took top honors in the sale, ending at $37,500. For $2,500, one bidder won the pair of gauntlets and matching vest. Jordan’s red woolen tablecloth measured 52¼ by 48¼ inches and relates to that in the Smithsonian’s National Museum of the American Indian; it is believed to have been worked by the same hand and fetched $11,875. An American institution purchased both the cape and the tablecloth.

The catalog entry for an early 20th century Salampasu mask from the Democratic Republic of the Congo noted that it was “considered one of the most important masks of its kind”, further describing three publications and two exhibitions of museums in which it had been presented. Its provenance included a private tribal and African art dealer from New York and Belgium, Bernard de Grunne. Standing just 33 inches tall, it fetched $31,250 from a European buyer and was the second-highest price at the sale.

Other masks have also been the subject of great interest from bidders, whether from Africa or other regions. A mid to late 19th century Kuba mask from the Democratic Republic of the Congo from two French collections as well as one in New York fetched $9,375, the same price fetched by a Biwat face mask from the Yuat River in Papua New Guinea which had at one time been part of the collection of the Ethnographic Museum in Dresden, Germany. 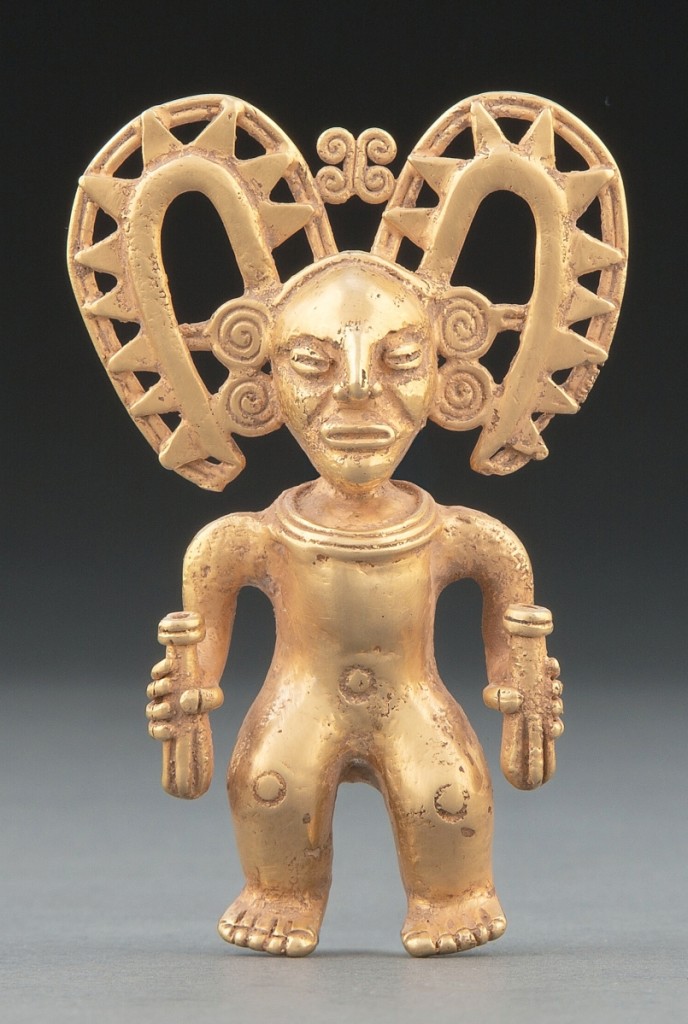 Pre-Columbian works also claimed a place in the rankings, with a ca. 700-1400 CE Diquis gold figural pendant from Costa Rica fetching $25,000 for a private American collector. The figurine was only 3¼ inches tall and weighed 108 grams. It had been managed by Enrique Vargas Alfaro, whom the auction catalog described as the source of the highest quality pre-Columbian art in the collections of Andre Emmerich, Morton D. May, Frederick and Jan Mayer, and William C. and Carol W. Thibodeaux. He also helped place works in the Smithsonian’s National Museum of the American Indian, the Denver Art Museum, and the Michael C. Carlos Museum. He was the grandson of Anastasio Alfaro (1865-1951), archaeologist, geologist, ethnographer and explorer, as well as member of the board of directors of the National Museum of Costa Rica and author of Antigüedades in Costa Rica (1892).

Of a similar vintage, a Colombian Calima gold disc pectoral with an abstract face in the center. Measuring 7 inches in diameter and weighing 160 grams (about a third of a pound), it came with a letter of authenticity and fetched $15,000.

A pair of Peruvian Chimu mosaic earrings made of shells, turquoises and other stones with a leather backing had been featured in a 2016 exhibition at Yale University Art Gallery titled “Weaving and the Social World: 3,000 years of ancient Andean textiles”. Dated to 1100-1400 CE, they fetched $20,000.

The same Yale exhibit also featured a carved stone Bolivian Tiahuanaco or kero goblet, a form used in celebratory celebrations for drinking chicha or corn beer. Standing only 5 inches tall and sculpted with a beamed face which is believed to represent the main deities of Tiahuanaco, possibly a sun god. The cup was considered to be of exceptional quality and fetched a proportionally excellent result of $11,563.

The earliest woven examples were led by an intricate Peruvian Chimu or Lambayeque ceremonial textile woven from camelid fibers with five square panels with stylized figures in shrines, with numerous tassels throughout. Believed to be in very good condition and professionally mounted on a velvet covered frame measuring 34 x 52 inches; it closed at $12,500. 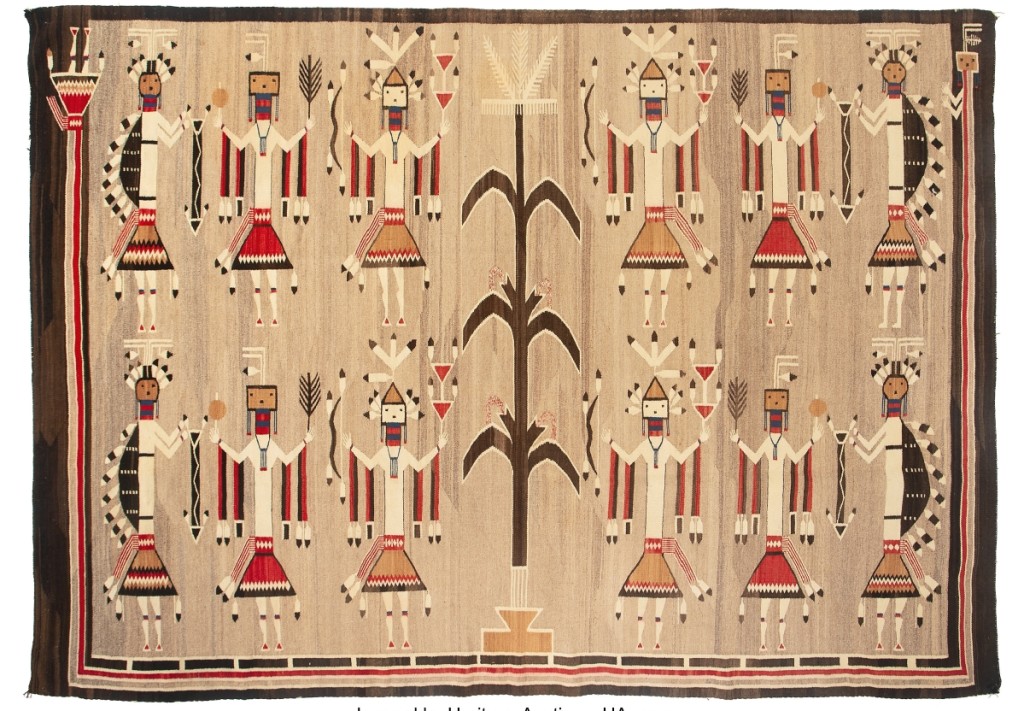 Measuring 111 inches by 80 inches and made circa 1925 from hand-spun native wool with aniline dyes, this Navajo sandpaint rug ended up at $21,250.

A seated figure of the Taino spirit from the Dominican Republic stood out and made $18,750. Dated to the late 15th to mid-17th century, the carved ironwood figure embodied the cycles of life and death with features that were both skeletal and manly. Wilfred Belmar collected the figurine in the 1930s, along with a few other lots from the sale; they had remained in his family since his death in 1980. Radiocarbon-14 analysis confirmed his age, and it was verified in 2015 by Taino specialist Dr. William Keegan, as well as Dr. John F. Scott, both from Florida. The figure had been displayed at the Museum of Native American History in Bentonville, Ark., and referenced in no less than four publications.

The sale included more than two dozen lots of Native American baskets, a subcategory dominated at $23,750 by a Yokuts coiled polychrome basket with lid made by Mary Sampson in the late 19th century. An intact provenance line from 1913 accompanied the basket of sedge, fern root and red bud, which was acquired by George Hume of Sanger, California, and later descended into his family in Phoenix, Arizona. A large illustrated Western Apache coiled storage jar, made from willow, devil’s claw and dyed yucca circa 1900, fetched $20,000. The 23½-inch-diameter pot had passed through several hands, including two auctions at Sotheby’s (in 1985 and 2009), two collections in New York and a gallery in Santa Fe.

Wakanda may not have been real, but the Black Panther Costume designer Ruth Carter and Hannah Beachler, the film’s production designer, both drew on very real tribes and cultures to represent the diverse peoples that make up the nation of Wakanda. In Black Panther, Wakanda is a kingdom made up of several different tribes, each […]

Have you ever thought about how some major religious holidays were celebrated around the world? African cultures are diverse, attached to customs, traditions and folklore that are mostly intertwined with monotheistic religions such as Islam and Christianity. Senegal, a country in West Africa, is no exception to these folk practices, most of the main religious […]

“Diversity counts”: Afro Fest presents African cultures and history The 3rd annual Afro Fest filled Omaha with music, dancing and delicious food. All in the hope of showcasing African cultures and creating a feeling of diversity. Update: September 6, 2021 at 12:30 p.m. CDT Afro Fest has brought many different cultures over 7,000 miles away […]